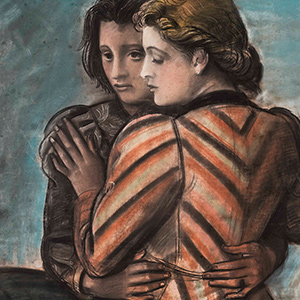 Achille Virgilio Socrate Funi was born in Ferrara in 1890. He was a Neoclassical painter. His education began at the art school Dosso Dossi, after which he attended the Brera Academy of Fine Arts from 1906 to 1910. In 1914 he joined the Futurist movement and painted Cubo-Futurist works. At the outbreak of the First World War, he enlisted with the battalion ‘Lombardo Volontari Ciclisti’ alongside Boccioni. The post-war years were decisive for the evolution of his painting, and in 1920 he held his ﬁrst exhibition at an art gallery in Milan. During this time, he became a champion of the ‘return to order’ and befriended Margherita Sarfatti, who promoted the techniques of Italian Renaissance painting. In addition to this, he studied Graeco-Roman statuary during this period and was also greatly inﬂuenced by De Chirico’s Metaphysical paintings. In 1922 Funi co-founded the Group ‘Sette Pittori del Novecento’, and in 1931 he participated in the ﬁrst Quadriennale as a member of the School of Milan. In the 1930s, he created numerous frescoes and in 1933, along with Mario Sironi and other artists, he signed the Manifesto della Pittura Murale. Funi became one of the most esteemed artists during the Fascist regime, also teaching painting at the Brera Academy of Fine Arts throughout the 1940s. His pupils included Giuseppe Ajmone, Valerio Pilon and Oreste Carpi. In 1945, he began to teach painting at the ‘Accademia Carrara’ in Bergamo and subsequently became its director, succeeding Luigi Brignoli.