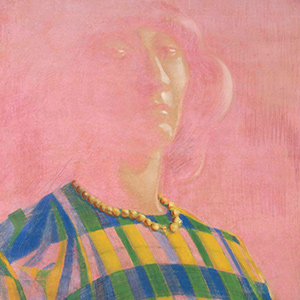 Adriana Fabbri was born in 1881 in Ferrara, where she would meet her future husband, journalist Giannetto Bisi. Her father Aldo, after gambling away the family money at casinos, set sail for Rio – leaving his wife and three children destitute. Fabbri, unable to rely on familial wealth for her education was entirely self-taught. Deprived of a formal art education, she developed her own original and bold manner of painting. She developed a multifaceted practice, where – as well as painting – she worked as an illustrator and caricaturist, as well as designing fashion, costumes and stage sets. Fabbri spent much of her early life in Padua at the home of her aunt Cecilia Boccioni, mother of her ﬁrst cousin Umberto. It was here that she formed an intimate friendship with Umberto’s sister, Amelia, who would later adopt the artist’s second child after the death of her husband. In 1905 she moved with her family to Milan where she drew inspiration from visiting the studios of Gaetano Previati and Luigi Conconi. In 1907, she moved with her husband to Bergamo and the following year she made her debut with two drawings at the 2nd Quadriennale in Turin. In 1911 she was invited by her cousin Umberto Boccioni to participate, with as many of her most “daring” works (as described by Boccioni) as she could provide, at the Prima Esposizione Libera in Milan. In June of the same year she took part in the Prima Esposizione Internationale di Umorismo at the Frigidarium of Rivoli, alongside the elite illustrators of the time – including Cappiello, Golia, and Sacchetti – she won a bronze medal. Her rejection of the “pupattola” woman, though never ﬂaunted as the banner of a theatrical protest, can be seen in all of her works, both pictorial and graphic. The caricatures Generi femminili (Female genders), La pavonessa (The peacock), La civetta (The coquette), La lucertola (The Lizard), and those of the voluptuous and immodest Salomè – which offended the noble and bigoted sensibilities of the board for the Roman Lyceum when exhibited at Palazzo Torlonia in 1911 – are the most authentic expressions of innate nonconformism. This same attitude of non-conformism is clearly represented in the artist’s numerous self-portraits, where she often depicts herself dressed as a man.

Later that same year, she took part in the 1st Esposizione Libera organised in Milan by Boccioni and other Futurist intellectuals. In later years she participated in other group exhibitions, including those at the Ca’ Pesaro in Venice, the Famiglia Artistica and the Società per le Belle Arti ed Esposizione Permanente in Milan. In 1914, she became a member of the Nuove Tendenze group and organised a solo exhibition of 51 works at the Milan store of the Enrico Finzi company. She was also sought after as a portraitist and, during the First World War, many of her political caricatures were published in Il Popolo d’Italia; she also contributed to La Domenica Illustrata and created fashion plates for the couture house founded by Domenico Ventura.