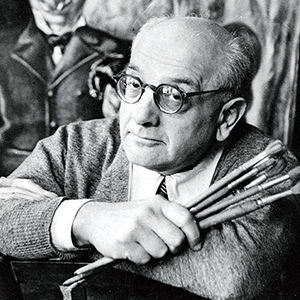 Alberto Savinio (Andrea Francesco Alberto de Chirico) was born in 1891 in Athens. Savinio’s talents took many forms – he was a musician, composer, writer, painter, journalist, essayist, playwright and set designer. Savinio was the third child of Italian expatriates Evaristo de Chirico and Emma Cervetto de Chirico, who was a Genoese noblewoman. His elder brother was the renowned painter Giorgio de Chirico. At the age of twelve Savinio graduated from the Athens Conservatoire, where he specialised in piano and music composition. After his father’s death in 1905, the family returned brieﬂy to Italy and then moved to Munich. Here Andrea began to be tutored in piano and composition by renowned musician Max Reger – under whose tutelage Savinio composed his ﬁrst piece to receive critical acclaim, a three-act opera, Carmela. By 1911, at the age of 20, Savinio’s music began to be performed in Munich. Later that year he moved to Paris where he befriended Guillaume Apollinaire, one of the foremost poets, critics, and artists at large in the avant-garde movement. While living in Paris, Andrea also became acquainted with a range of writers and artists such as Pablo Picasso, Jean Cocteau, Max Jacob, and Fernand Léger – who would remain a constant form of inspiration to him throughout his career. In 1914 Savinio founded the musical movement Sincerismo, which largely abandoned harmony in favour of dissonance and rhythm. Shortly after the outbreak of World War I, Savinio returned to Italy to enlist with his brother. At a military hospital in Ferrara, the brothers met Carlo Carrà and it was here – under the inﬂuence of Giovanni Papini – that the three founded the Scuola Metaﬁsica. Scuola Metaﬁsica became one of the most signiﬁcant and inﬂuential artistic movements of twentieth-century Italy. In 1918, Savinio published his ﬁrst novel Hermaphrodite, which was a multilingual piece that intertwined different languages as well as prose and poetry. Savinio would go on to write four more operas and publish a total of forty-seven books in his lifetime. In 1926, Savinio returned to Paris, where he began to pursue painting. In 1927, he gave his ﬁrst one-man show as a painter, at the Bernheim Gallery in Paris. His contributions to the Avant-Garde movement during this period where in sharp contrast to the provincialism favoured by the National Fascist Party. Savinio died in Rome on 5th May 1952. In 1954, the Venice Biennale dedicated a room solely to Savinio’s artistic legacy. The works of Savinio and his brother Giorgio de Chirico are often cited as the basis of both the Surrealist movement and Magic Realism.