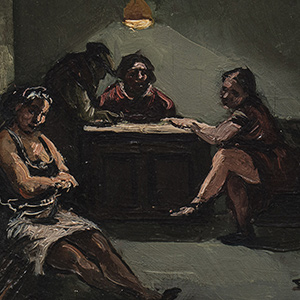 Alberto Ziveri was born in Rome in 1908. He was a modernist painter of the Scuola Romana, an art movement which was deﬁned by a group of Expressionist painters active in Rome between 1928 and 1945. Ziveri painted urban landscapes and realist narrative scenes. He used chiaroscuro painting techniques to explore everyday subject matter, which ranged from depicting piazzas and tram stops to the interior scenes of brothels. In 1943, Ziveri won the IV Premio Quadriennale di Roma art award, and in 1989 the literary prize Premio Viareggio-Rèpaci. He died in Rome in 1990.