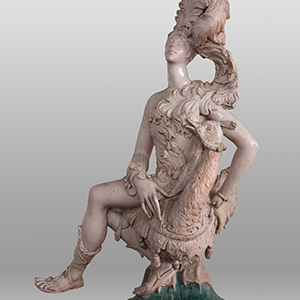 Andrea Spadini was born in Rome in 1913. He sculpted fantastical and highly imaginative Baroque ﬁgures, which he modelled in ceramic, terracotta and tuff stone. Until the age of twelve he was both a model and apprentice in his father’s studio, the painter Armando Spadini (Florence 1883 – Rome 1925). Andrea was depicted in 1913 by his father in the monumental painting Ritrovamento di Mosè (The Finding of Moses), which now resides in the Vatican. His father’s studio was in the Uccelliera and he grew up surrounded by the wonders of the Villa Borghese. The inﬂuence of the playful and whimsical works of Gian Lorenzo Bernini are apparent in Spadini’s works. He was also inspired by his teacher Libero Andreotti at the Liceo Artistico in Florence, and later by Arturo Martini who at the age of sixteen chose him as an assistant at the Industrial Institute of Monza. After the war, he began experimenting with shaping ceramics, which would become his greatest and most lucrative occupation, both in Italy and abroad. In 1961, he signed an exclusive contract with Tiffany & Co. which occupied him for many years. He created a beautiful and intricate window display for their shop on Fifth Avenue in New York, and during his stay he was commissioned to create the musical animals for the Central Park clock. He later worked on the decoration of Villa Cicogna in Venice together with Fabrizio Clerici. In the ﬁnal phase of his career, he created numerous decorative works for Hollywood stars, Italian noble families and Italian celebrities. His clients ranged from Henry Fonda, Humphrey Bogart and Lauren Bacall – to the Countess Pecci Blunt, the Duchess Alliata, the Marchesa Pallavicini – as well as Mariella Lotti, Anna Magnani and Alberto Sordi. He died in 1983. The only monographic exhibition dedicated to the sculptor after his death dates back to 1989, until the most recent exhibition at Galleria del Laocoonte (Rome). Through the extensive archival research undertaken by Galleria del Laocoonte, the artist’s extraordinary body of work has finally been given the consideration and recognition that it deserves.