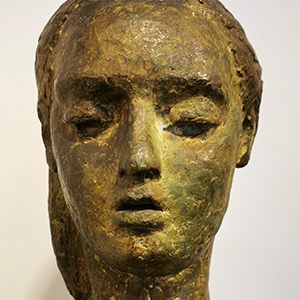 Antonietta Raphaël (Antonietta Raphaël de Simon) was born to Jewish parents in Kaunas, Lithuania in 1895. She was the daughter of a Rabbi, and following her father’s death Raphaël and her mother moved to London. In London she often visited the British Museum and there she met Jacob Epstein and Ossip Zadkine, a renowned sculptor and member of the Expressionist movement. Raphaël’s principal concern during this period however was music, she studied at and eventually graduated from the Royal Academy of Music in piano. Following her mother’s death in 1919, she moved ﬁrst to Paris and then in 1924 to Rome. In 1925 Raphaël attended the Accademia di Belle Arti where she befriended the artist Mario Mafai, with whom she would have three daughters. In 1927, Raphaël and Mafai moved to an apartment in via Cavour in Rome which quickly became a meeting point for literati including Giuseppe Ungaretti and Leonardo Sinisgalli, as well as young artists including Scipione, Renato Marino Mazzacurati, and Corrado Cagli. This was the birth of the Scuola Romana, a modern art movement characterised by Expressionism. In 1929, Raphaël exhibited her work for the ﬁrst time at I Sindacale of Lazio. In 1930 she moved permanently to Rome and began working in the studio of sculptor Ettore Colla. Between 1936 and 1938 she again exhibited at the Sindacali. Due to the implementation of Fascist racial laws, Raphaël and her family escaped Rome and settled in Genoa. She stayed mostly in Genoa for the duration of World War II and worked alongside inﬂuential sculptors Edoardo Alﬁeri, Geovanni “Nanni” Servettaz, Raimondi, Camillo Maine, Lorenzo Garaventa, Sandro Cherchi, Agenore Fabbri, Roberto Bertagnin and Luigi Navone. In 1948, Raphaël exhibited at the Biennale di Venezia. In 1952 a selection of Raphaël’s works were exhibited at the Galleria dello Zodiaco in Rome, which garnered considerable praise from critics. In 1956 she travelled to China and exhibited her artwork in Beijing with a group of artists including Aligi Sassu, Agenore Fabbri and Giulio Turcato. She continued exhibiting throughout Europe, Asia and America in this period. The 8th Rome Quadriennale of 1959-1960 was dedicated to the Scuola Romana and many of Raphaël’s works were displayed, marking her as one of the key members of the movement. She died in Rome in 1975.