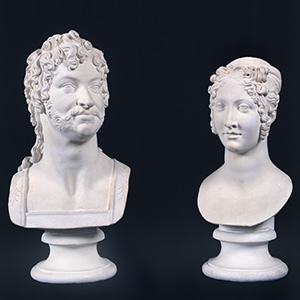 Antonio Canova was born in 1757 in Possagno, in the Venetian Republic. He is regarded as one of the greatest Neoclassical artists and famed in particular for his sculptural works in marble. His father was a stonecutter, and after his death in 1762, Canova was placed in the care of his paternal grandfather Pasino Canova. Pasino was a stonemason, owner of a quarry and a sculptor who specialised in altar statues and low reliefs which he executed in a late Baroque style. Canova’s grandfather introduced him to sculpting, which Canova showed a talent for from a young age – executing two shrines in marble at the age of nine. In 1770, Canova began work as an apprentice to Giuseppe Bernardi, followed by Giovanni Ferrari, where he worked until he attended the Accademia di Belle Arti di Venezia. At the Accademia, he won several awards. Following this he secured many important commissions, sculptures which he realised in the late Rococo style. These commissioned works were widely praised and Canova became a favourite of the Venetian elite. In 1779, Canova opened his own studio at Calle Del Traghetto at S. Maurizio. During this time, Canova received his ﬁrst commission for a marble statue. The statue, which depicted Daedalus and Icarus, inspired great admiration and Canova was paid 100 gold zecchini on the completion of the work. In 1780 Canova travelled to Rome, the following year the Venetian ambassador at Rome hired him to sculpt Theseus and the Minotaur (now in the collection of the Victoria & Albert Museum, London). Between 1783 – 1787, Canova designed and sculpted a funerary monument dedicated to Clement XIV for the Church of Santi Apostoli. This work secured Canova’s reputation as the preeminent artist of his generation. In 1792, he completed another cenotaph, this time commemorating Clement XIII for St. Peter’s Basilica. The following decade was extremely productive for Canova, during which he began works such as Hercules and Lichas, Cupid and Psyche, Hebe, Tomb of Duchess Maria Christina of Saxony-Teschen, and The Penitent Magdalene. By 1800, Canova was the most celebrated artist in Europe. His reputation attracted patrons from France, England, Russia, Poland, Austria and Holland, as well as several members from different royal lineages. Among his list of patrons were Napoleon and his family, for whom Canova produced several depictions between 1803 and 1809. In 1802, Canova was assigned the post of ‘Inspector-General of Antiquities and Fine Art of the Papal State’, a position formerly held by Raphael. In 1814, he began his most famous work The Three Graces. In 1815, Canova was named ‘Minister Plenipotentiary of the Pope’, his role being to recover various works of art that were taken to Paris by Napoleon. In 1816, Canova returned to Rome triumphant, with a selection of works that he recovered. He was rewarded with several marks of distinction: he was appointed President of the Accademia di San Luca, inscribed into the “Golden Book of Roman Nobles” by the Pope’s own hands, and given the title of Marquis of Ischia.  Canova died in 1822 and his body was placed in the Tempio Canoviano. His memorial service was so grand that it rivalled the ceremony that the city of Florence held for Michelangelo in 1564.