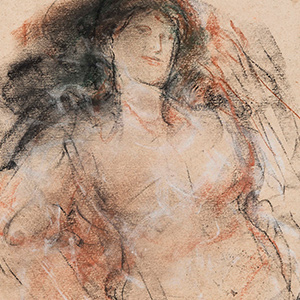 Antonio Mancini was born in 1852 in Rome. From an early age he showed signs of great artistic ability, and at the age of 12 was admitted to the Institute of Fine Arts in Naples. It was there that he was taught by Domenico Morelli, who favoured dramatic chiaroscuro and vigorous brushwork. Under his tutelage Mancini developed his talents rapidly, and in 1872, he exhibited two paintings at the Paris Salon. Mancini was at the forefront of the Verismo movement, which is deﬁned by the practice of Realist painting during the 19th Century in Italy. His subjects included the children of the poor, young circus performers, and the musicians that he observed on the streets of Naples. He lived in Paris in the 1970s, where he befriended fellow painters Edgar Degas, Édouard Manet and John Singer Sargent. Mancini’s works in this period are brightened in palette and realised in a distinctive impasto technique. In 1883, he moved to Rome, where he stayed for twenty years. During this period, he was often destitute and relied upon friends and art buyers to survive. However, after the First World War, his living situation became more stable. He died in Rome in 1930.