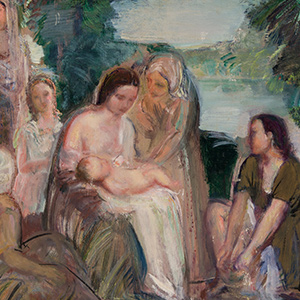 Armando Spadini was born in Florence in 1883. He was a painter and ceramist. He studied at the Academy of Fine Arts in Florence. Here he met the writer, painter and sculptor Ardengo Soffici, who introduced him to the Symbolist magazine Leonardo in 1902. In 1906, he took part in the 59th Esposizione Annuale della Società delle Belle Arti di Firenze. He moved to Rome in 1910, where he specialised in portraits and city views. He contributed to the four Roman Secession exhibitions between 1913-1916. Following the First World War he went through a difﬁcult period after being branded a conservative by the magazine Valori Plastici. However, in 1924 the Venice Biennale devoted an entire room to Spadini’s work at the 14th Esposizione Internazionale d’Arte della Città di Venezia. This marked the end of hostility towards the artist and demonstrated the deﬁnitive success of his career. He died in Rome in 1925.