Even though our doors are temporarily closed to the general public, in an attempt to protect our local community from the spread of COVID-19, Laocoon Gallery remains operational in all other respects.

Our recently unveiled Art Insights programme will present a carefully selected group of works to our audience. Paintings and sculptures that tell stories, which are representative of the life and works of important artists of the 20th Century and that will allow you to understand our artistic mission. 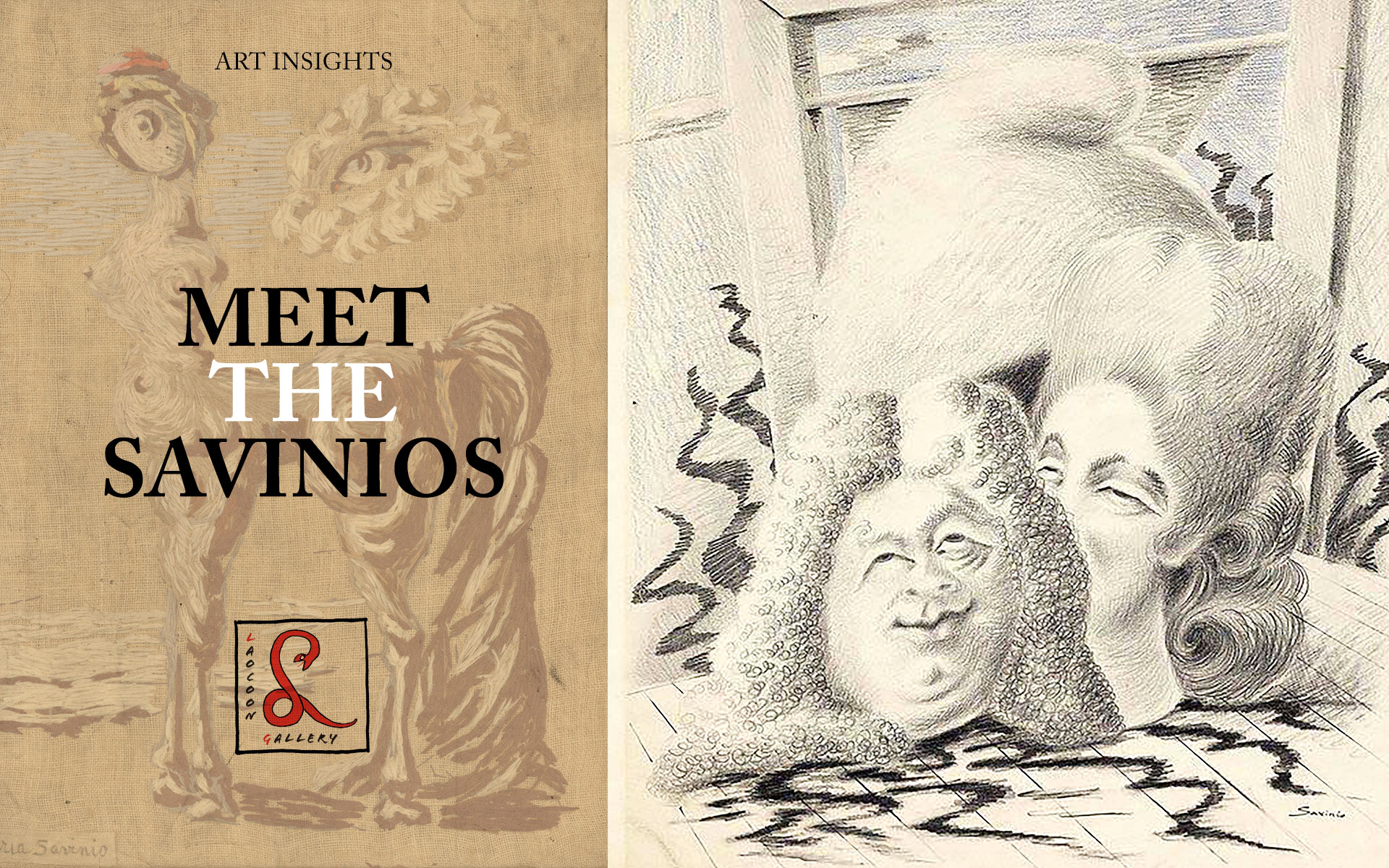 Maria Morino Savinio was born in Rome in 1899, and began embroidering from a young age, but it was only during the period she spent in Paris in the 1920s that she made her first embroidery on canvas, from a drawing made by brother-in-law, Giorgio De Chirico.

Whilst in Rome, Maria was a successful stage actress, and as well as working in the same company as Eleonora Duse, was used to socialising with middle-class families. However, when she moved to the French capital with her husband, artist Alberto Savinio, the pair had practically no funds. Although she had not made a career out of her passion for embroidery until that point, in Paris the opportunity arose for her to make a virtue out of necessity. Later, when Alberto started to be successful, Maria took the decision to fully dedicate her time to their children. She began embroidering again only after the death of her husband, and in 1954 held an exhibition of the works that she had created over a two-year period. These works were all faithfully derived from paintings by De Chirico and more notably her husband, of whom she poignantly wrote that this was, “another way to stay close to him”.

The three tapestries shown here are based on three well-known paintings by Alberto Savinio: ​The return of the goddess to the temple ​(1944), ​Centaurina ​(1950) and ​Orpheus the widower ​(1950). These three subjects are taken from Greek mythology and translated into visual imagery through the artist’s creative power of invention. The tapestries depict the goddess Athena with the head of an owl, a feminised centaur and Orpheus with a zither in place of his head. Maria faithfully reproduced the colours of the artist’s palette through expertly mixing together a dense weave of wool and artificial silk threads. She recreated the effects of light and shadow as well as shade and volume, all the while paying close attention to the dimensions of the original work, in order to create true copies of these works woven on canvas.

Alberto Savinio was a gifted pianist, composer, musicologist, critic, writer, and painter. As the younger brother of Giorgio de Chirico, Savinio’s career was often overshadowed by the mainstream success of his accomplished sibling; however his genius has been widely and internationally recognised by critics, collectors and fellow artists alike.

The four works shown here give an insight into both the virtuosity and multiplicity of the artist, differing in both their subject matter and the techniques used.

“I die innocent of all the crimes imputed to me. I pardon the authors of my death, and pray God that the blood you are about to shed will never fall upon France” – Louis XVI

In Louis XVI, Savinio describes in fine pastel the faces of the French king and his wife Marie Antoinette moments after their execution. The pair are found at the centre of the composition, with both the husband and his obscured wife seemingly smiling as they pose. Behind them is a square which at first glance could be taken for a picture frame, but in reality is a guillotine, with its deadly blade concealed by the image of a Phrygian cap, an important symbol of the French revolution.

Souvenir of a family sees the artist, whose real name was Andrea De Chirico, using an old photograph from his family album as the subject of a beautiful watercolour. In it he portrays older brother Georgio De Chirico alongside his sister Adele and their mother Gemma.

The skill of Alberto Savinio in oil painting can be seen clearly in Portrait of Marcella Giulini, where he portrays the face of Marcella De Girolami (Rome 1921 – Milan 1995), wife of the well-known conductor Carlo Maria Giulini (Barletta 1914 – Brescia 2005), who was a great friend of the artist. The portrait was created and presented as a gift to the couple.

And finally, in a piece which is particularly characteristic of the artist, Alberto Savinio uses his distinctive form of irony to translate a biblical theme into the domestic domain. Departure of the prodigal son is a drawing which relates to the homonymous painting by this multifaceted creative genius. The work represents the protagonists of the religious story in the zoomorphic transformation typical of Alberto Savinio.

For more information on these pieces, please contact info@laocoongallery.co.uk