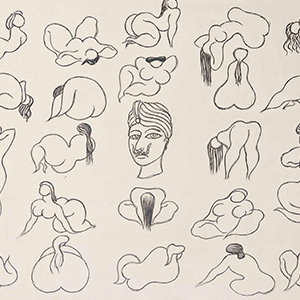 Dino Buzzati was born in San Pellegrino di Belluno in 1906. As well as being a painter, he was a novelist, poet, writer of short stories and a journalist for Corriere della Sera. Following his father, who was a professor of international law, he enrolled in the law faculty of the University of Milan in 1924. At the age of 22, he was hired by the Milanese newspaper Corriere della Sera, where he remained until his death. For this publication he worked in a diverse variety of roles – as a reporter, special correspondent, essayist, editor and art critic. He began writing ﬁction in 1933, producing a total of ﬁve novels as well as numerous books of short stories and poetry. During the Second World War, he served in Africa, as a journalist attached to the Regina Marina. Following the end of the war he published The Tartar Steppe, his most famous novel, which tells the story of a military outpost that awaits a Tartar invasion. In its sentiment and conclusions, it has been compared to notable existentialist works, particularly Albert Camus’s The Myth of Sisyphus. He was also an acclaimed and exhibited artist, who combined his artistic and literary talents into the creation of a comic book based on the myth of Orpheus, Poem Strip. The illustrations for Poem Strip have been highly praised for their bold, sensual power. Richard Rayner of the Los Angeles Times wrote in 2009: ‘The images are surreal, sexy and frightening, and the text is both compelling and poetic.’ In 1966 he married Almerina Antoniazzi, the year which marked the release of his last novel, Un amore. He died in Milan in 1972.