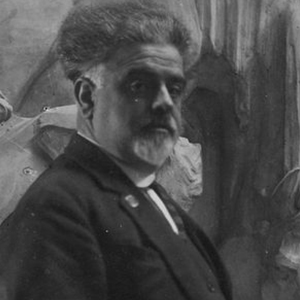 Duilio Cambellotti was born in Rome in 1876 and although he learned his first artistic skills in the workshop of his father Antonio from an early age his initial training was in accountancy, from which he graduated while studying art independently.

Between 1893 and 1897 he enrolled in some courses at the Academy of Fine Arts in Rome, but without ever attaining his diploma. Upon leaving the academy he received his first commission, for the construction of the support poles of the Roman tramways. Initially his artistic career followed the path of designer, creating lamps, mirrors, boxes and furniture. A key step in his career was when he met with Alessandro Marcucci, an official at the Ministry of Education in Rome, who brought him into the world of theatre as a set designer. Also in Rome he collaborated with the INDA (Istituto Nazionale del Dramma Antico) for whom he created the set for their production of Agamemnon of Aeschylus, which represented the inauguration of the institute in 1914.

Alongside his work in theatre Cambellotti was also a talented illustrator, and in 1901 he won il Concorso Alinari for his illustration of the Divine Comedy. Following on from this achievement he began working with several magazines, such as la Lettura, Rapiditas, La Casa, Fantasio and l’Avanti della Domenica as well as illustrating literary texts. Cambellotti was also very sensitive to socio-political issues, and together with fellow artist Giacomo Balla, writer Cena and Marcucci was dedicated to the redevelopment of the Pontine Marshes, creating in 1905 the first Scuola per Contadini.