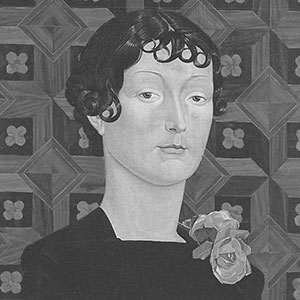 Edita Walterowna von Zur Muehlen (Edita Walterowna Broglio) was born in Riga, Latvia, in 1886. She was a painter of magic realism. From 1908 to 1910 she studied at Konigsberg Art Academy in East Prussia. In 1910, she left Latvia and moved to Rome, where she immediately began to exhibit alongside Roman secessionists (1913-1914). She married the painter and art collector Mario Broglio, and together they founded the Italian art magazine Valori Plastici in 1918. The magazine was focused on aesthetic ideals and metaphysical artwork. It supported the art movement Return to Order, seeking to create a change of direction from extreme avant-garde art to a revival of classicism and realism. The Return to Order, was a reaction against the War and its associated art movement Futurism, which praised machinery, violence and war. The magazine promoted national and Italic values, associated with the cultural policies of fascism, but equally it had a broader outlook towards Europe and artistic discourse in general. Her pictorial activity, interrupted by the war, resumed again in the ﬁfties. Some of her works were included in the historical exhibition curated by Carlo Ludovico Ragghianti’s Arte Italiana 1915-1935, which was held in Florence at Palazzo Strozzi in 1967. In 1971, she had her most important solo-exhibition at the age of eighty-ﬁve. Her painting, sober, composed and enchanted, testiﬁes to her immense artistic talent.