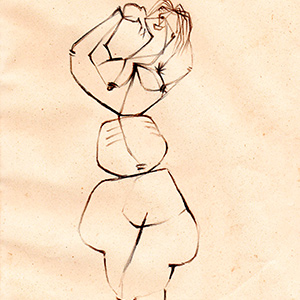 Enrico Prampolini was born in Modena in 1894. He was a Futurist painter, sculptor, scenographer and architect.

He studied in Lucca and Turin, and brieﬂy attended the Accademia di Belle Arti in Rome, studying under Duilio Cambellotti. In 1912 he joined the studio of Giacomo Balla and became a member of a Futurist art collective, through which he met the leaders of the movement, including Umberto Boccioni, Carlo Carrà, and Gino Severini. He exhibited with other Futurists at the Galleria Sprovieri in Rome in April and May of 1914 and, shortly afterwards, in Prague.

In 1913 he wrote the manifesto Cromofonia: Il colore dei suoni (Chromophony: The Colours of Sounds), in which he adopted the principles of Vasily Kandinsky. He later critiqued those principles in his works Pittura Pura (Pure Painting) and Un’arte nuova? Costruzione assoluta di moto-rumore (A New Art?: The Absolute Construction of Sound in Motion) in 1915. In subsequent years, he became a key link between Italian artists and the international avant-garde. He met the poet Tristan Tzara in Rome in 1916 and took part in the international Dadaist exhibition of Zurich in the same year. His international networks continued to expand as he founded and wrote for a succession of publications, including Avanscoperta (1916), Noi (1917), and Sic (1919), and organised exhibitions featuring his own work along with that of other Futurists and international avant-garde artists. In 1918, he exhibited at the Galleria dell’Epoca in Rome, alongside Carrà, Giorgio de Chirico, and Ardengo Sofﬁci.

After extensive travel abroad in the early 1920s and an ongoing exchange of ideas with artists including Alexander Archipenko, Jean Arp, Marc Chagall, Albert Gleizes, and Vasily Kandinsky, he moved to Paris. He lived there from 1925 to 1937, associating with members of various artists’ groups, including Der Sturm (The Storm) and the Section d’Or (Golden Section), as well as artists connected to the Bauhaus. In 1926 he exhibited at the Venice Biennale with the group Die Abstrakten (The Abstract Artists), and in 1930 he joined the Parisian group Cercle et Carré (Circle and Square). Shortly afterward he founded Gruppo 40 (Group 40) and became associated with Abstraction-Création (Abstraction-Creation), a movement formed to counteract the inﬂuence of Surrealism.

Prampolini continued to paint and exhibit, while simultaneously exploring theatre, dance, cinematography, and architecture. In 1925 he founded the dance company Teatro della Pantomima Futurista (Theatre of Futurist Pantomine), where he acted as both set and costume designer. Among his building designs were pavilions in Turin (1928) and Milan (for the Milan Triennial, 1933), and in 1934 he founded the architecturally focused magazine Stile Futurista. Towards the end of his life, Prampolini expanded into decorative work, including stained glass and mosaics for the Museo Nazionale delle Arti e Tradizioni Popolari, Rome, between 1940 and 1941, and for the Milan Triennial in 1954. During his lifetime he was the subject of a monographic exhibition at Galleria di Roma (1941), and posthumous exhibitions of his work have been presented by Galleria Narciso, Turin (1963); Galleria Civica, Modena, Italy (1978); Palazzo Comunale, Todi, Italy (1983); and Palazzo delle Esposizioni, Rome (1992). He died in Rome in 1956.