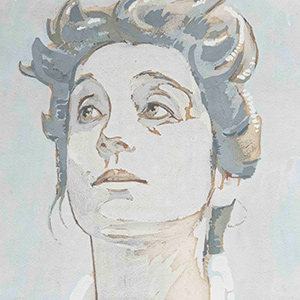 Enrico Sacchetti was born in Rome in 1877. He was an illustrator and fashion designer, who made his fortune in Paris. He created sharp faced, angular depictions of the ‘new woman’ – who was a modern, economically independent and cosmopolitan ﬁgure. The reﬁned aesthetic of this elegant ‘new woman’ was expertly captured by the artist’s hand. At the outbreak of the First World War, he returned to Italy, where he worked as a propaganda artist. He died in Settignano in 1967.