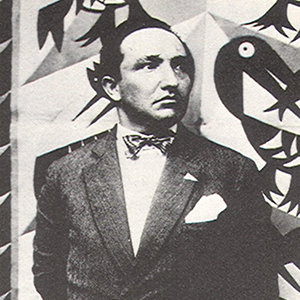 Fortunato Depero was born on 30th March, 1892, in Fondo, Italy. His education began at Scuola Reale Elisabettina in Rovereto, Italy, where he learned fine art techniques alongside those for the applied arts. In 1910 he began a job as a marble worker’s apprentice to further his artistic development before discovering the Italian journal Lacerba in 1913, which inspired his movement towards futurism. Although Depero’s career began as a fine artist he was to find significant success following his development into the commercial art scene, ultimately becoming one of the most successful futurist graphic designers.

Futurism was marked by a hatred for anything representative of the past and as such people like Depero showed little fondness for museums and galleries, viewing them as aristocratic and ancient. Futurists supported machine-driven technology and garnered a strong desire to rebuild anew. Speed and power were inspirations for the artists, and futurist works were created with geometric elements and great intensity, direction and colour. Advertising was seen as an important medium which allowed futurists to extend these ideas to a wider audience. Some of his most important work was with futurist painter Giacomo Balla, and the pair signed The Futurist Reconstruction of the Universe together, which proposed “sound and kinetic three-dimensional advertisements,” heretofore completely unheard of in the world of art.

In his 1927 masterpiece of graphic design Depero Futurista, Depero speaks of new futurist advertising design styles. The pages were fastened with nuts and bolts and filled with geometric shapes in a black and white paper cut-out style, this created a unique, modern and thereby futurist design. Also, the simplicity of the design made the images easy to reproduce by line block in newspapers and in colour by lithography for posters. Following the release of this book Depero moved on to New York, where he continued to paint, design for the theatre and work as a freelance advertising designer. He designed covers for magazines such as Vanity Fair, but the majority of his work was used to promote futurism as well as himself. In 1929, Depero wrote the outline for Il Futurismo e l’arte pubblicitaria (Futurism and the Art of Advertising), which spoke of the inevitable impact that advertising would make on art in the future.

Depero eventually began working on a series of advertisements for Campari aperitif, including a wood sculpture and several posters. His work was compiled into a book called Numero unico futurista Campari 1931. In addition, Depero created a distinctive bottle design for Campari Soda in 1932, which is still used in production today.

Another of Depero’s most successful advertisements was a poster for S. Pellegrino magnesia. The poster was composed of key futurist design elements, such as geometric shapes; large areas of flat, bright colour; and the illusion of movement.