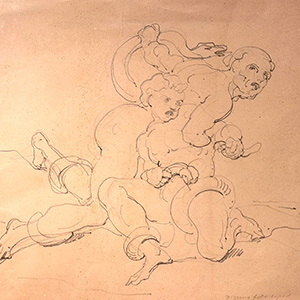 Francesco Coghetti was born on 12th July 1801 in Bergamo, which lies close to Milan in the north of Italy. He was fortunate enough to be born into wealthy family and as such was able to be educated at prestigious private schools. After completing his primary studies, he enrolled at Accademia Carrara, where he studied with Giuseppe Diotti. In 1818, he won the Accademia’s drawing competition.

In 1820 he moved to Milan, and he following year he won an award for drawing and design from the Accademia di Belle Arti di Brera. This encouraged him to move to Rome and, thanks to his father’s financial support, he was able to study with Vincenzo Camuccini. He also enjoyed the patronage of Cardinal Angelo Mai, who was a fellow ‘Bergamaschi’. In 1825, he was married. The 1830s were a very successful time for him, during which he won several awards and received a continual flow of commissions from all over Europe.

In 1844, he was offered the position of Director at the Academy of San Carlos in Mexico City, but declined to accept. Fourteen years later, faced with declining commissions, he accepted a position as President of the Accademia di San Luca. In the late 1860s, he became involved in politics as well as art, when preparations were being made for the Papal States to be annexed to the Kingdom of Italy. The Accademia was considered to be part of the Pope’s temporal domain and was transformed into the “Royal Academy”.

It was a difficult process and, because he had already come under criticism for his performance in office, he was relieved of his teaching duties in 1873 and suspended as President. Two years later, on 20th April 1875 in Rome, he died of apoplexy after a sudden loss of consciousness.