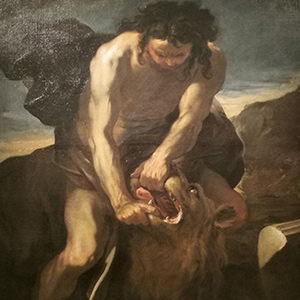 Gian Lorenzo Bernini was born in Naples on 7th December 1598, beginning his career under the direction of his father, Pietro Bernini, a Florentine sculptor. At a young age, his remarkable talent earned him the patronage of Pope Paul V. His work was inspired by his in-depth study of Michelangelo and of the ancient Greek and Roman marbles at the Vatican. He established himself as an independent sculptor, with his first life-size sculptures commissioned by Scipione Cardinal Borghese, a member of the papal group. The series included Aeneas, Anchises, and Ascanius Fleeing Troy, Pluto and Proserpina, Apollo and Daphne, and David (not to be confused with the well-known Michelangelo sculpture) and demonstrates the development of Bernini’s unique style that would be later termed as the Baroque Style. His sculptures enacted movement and true-to-life physical features of the mythological figures, while remaining grand and exquisite.

After being knighted in 1621 at the age of 23, Bernini literally began to take over Rome, not only with his sculptures, but also with important architectural commissions and his other occupations as painter, playwright, composer, theatre designer, and caricaturist. Rome was to remain his home for many successful years, which included architectural works for St. Peter’s Basilica and Palazzo Barberini as well as a number of commissions under the influence and patronage of pontificate Urban VIII, who had encouraged him to paint and practice architecture as well as continuing his prolific accomplishments as a sculptor

In 1665 Bernini finally left Rome and travelled to France on the invitation of King Louis XIV. His primary task was to design a royal residence but whilst there he sculpted a bust of King Louis XIV, creating a portrait that was so pristine it became the standard for royal portraits for nearly 100 years.