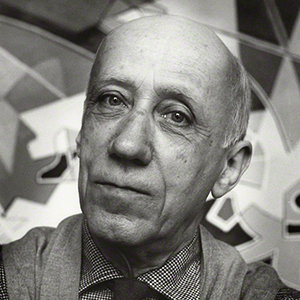 Gino Severini was born in Cortona, a hilltop town positioned within the famous landscapes of Tuscany, on 7th April, 1883.

He moved to Rome in 1899, where he met Giacomo Balla who introduced him to pointillist painting, for which his interest deepened during his stay in Paris in 1906. Whilst in Paris he came into contact with Pablo Picasso, Georges Braque, Juan Gris, and Guillaume Apollinaire, and participated in the birth and development of Cubism. Despite this stay in Paris, he did not interrupt his contact with Italy. In fact, after having joined the Futurist movement at the invitation of Filippo Tommaso Marinetti, he was one of the signatories of the 1910 Manifesto of Futurist Painting with Giacomo Balla, Umberto Boccioni, Carlo Carra and Luigi Russolo.

In 1912 he convinced Boccioni and Carra to join him in Paris, where he would organise the first Futurist exhibition at the Bernheim-Jeune gallery. Later he participated in other Futurist exhibitions across Europe and the United States. In 1913 in London, at the Marlborough Gallery, came his first individual exhibition, which was later presented at the Der Sturm gallery in Berlin. From 1921 Severini changed from a Cubo-Futurist aesthetic to a painting style that can be described as neoclassical with metaphysical influences. This evolution falls squarely in the trend which is defined as return to order, or in French Rappel à l’ordre, similar to The Return to Craft introduced in a famous article by Giorgio De Chirico published in 1919 in the journal Valori Plastici. From 1924 to 1934 he devoted himself almost exclusively to sacred art, in the form of large frescoes and mosaics, especially for the Swiss churches of Semsales and La Roche.

In 1926 and 1929 he participated at two exhibitions of the artistic movement Novecento in Milan and one in Geneva (also in 1929). In 1930 he was selected for the Venice Biennale. He then moved to Rome, where he participated in the Quadriennale of 1931 and again in 1935, when he won the Grand Prize for painting, with an entire room dedicated to his work. After this he moved permanently to Paris, where he would teach mosaics with Riccardo Licata working as his assistant. He died there on 26th February 1966 in his home at 11 rue Schoelcher. On April 15 of that year his remains were transferred to Cortona, his hometown.