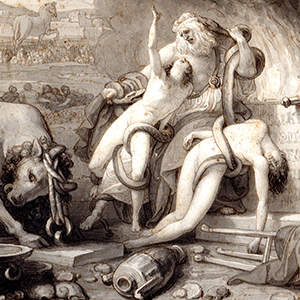 Giovanni De Min was born in Belluno in the Veneto region of northern Italy on 24th October 1786.

As the son of a domestic servant he was born into humble beginnings, and therefore without the patronage of the Falier family of San Vitale he would not have been able to attend the Academy of Fine Arts in Venice following his discovery by Paolo de Filippi whilst completing an apprenticeship in Padua. Whilst there he studied alongside Francesco Hayez, with whom he would go onto work, and was a pupil of Teodoro Matteini and Pietro Tantini.

In 1808, De Min was awarded a stipend from the Academy to study in Rome, where he fell under the influence of neoclassical artists such as Antonio Canova. Upon returning to Venice De Min mainly dedicated himself to fresco or panel decoration of houses and salons, regularly working with Hayez and using predominantly mythological figures for his works. In 1817 he completed the now lost decorations in Palazzo Cicognara using the designs of Hayez, before in 1819 collaborating with him again to help decorate the palace of Count Giovanni Papadopoli in San Marina, where he depicted Leda, Diana and Actaeon, Salmacis and Hermaphrodite, Callisto, Venus and the Graces. He also painted The Four Elements and The Dream of Love for Casa Comello near San Canciano in Venice. In 1819, following the death of Angelo Pizzi and with the support of Count Cicognara, De Min was named as professor of sculpture at Accademia di Belle Arti di Venezia.

It is not clear how active he was as a professor since by 1818 De Min had already relocated to Padua where he was very active as an artist, working on the decoration of Palazzo Pesaro-Papafava with subjects from the Iliad before painting A Triumph of Rossini (1822) in Palazzo Treves de’ Bonfili. In a further collaboration with Hayez he also painted a series of mythologic subjects: Convito degli Dei, Triumph and Marriage of Bacchus and Ariadne, Mars and Venus, and Venus and Ascanius (1821–24) in Palazzo Rusconi Sacerdoti. In 1824-25, he painted the Story of Psyche, and episodes from Tasso’s work in Palazzo Gaudio. In 1825, in the Palazzo Rossi, now Moschini, he painted mythologic subjects. In 1828, in Palazzo Revedin, he painted La Fortuna, Laocoön, Ulysses kills Procedus. In this same decade he also painted the Education of Achilles and Apotheosis of Canova inside Palazzo Crescini, Trieste. For the Fasolo house he painted Erminia saves Tancred, Jove and Juno and Leda, then between 1829 and 1831 he frescoed the Story of Psyche for Palazzo Treves de’ Bonfili in Venice, a palace where Ludovico Lipparini, Borsato, Cicognara and others were employed. He also painted a large historic canvas of the Massacre of Alberico da Romano and his family, which only is now known through an 1839 lithography by Francesco Locatello.

In his later years De Min moved to Ceneda, near present-day Vittorio Veneto, Treviso, and painted frescoes in churches and Villas including La Lotta delle Spartane in Villa dei Patt near Belluno. He also painted the Council Hall of Palazzo Rosso in Belluno and in 1837 a salon of Villa Gera in Conegliano.