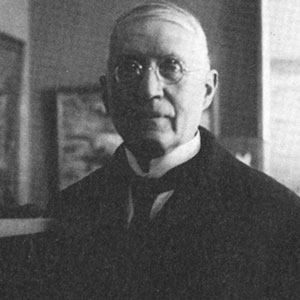 Giulio Aristide Sartorio was born in Rome in 1860. He was a painter and ﬁlm director. He studied at the Rome Institute of Fine Arts. In 1883, he presented a Symbolist work at the International Exposition of Rome and later that year he won a gold medal at the Paris Universal Exhibition. In 1893 he travelled to England, where he met key members of the Pre-Raphaelite group.

In 1895, he participated in the Venice Biennale at the 1st International Exposition of Art of Venice. From 1896 to 1898, he taught at the Weimar Academy of Fine Arts. The beginning of the century marked the height of Sartorio’s artistic fame.

He produced decorative friezes for the 5th Esposizione Internazionale d’Arte of Venice (1903), the Mostra Nazionale of Fine Arts (Milan, Parco Sempione, 1906) and Palazzo Montecitorio in Rome (1908–12). He was wounded while serving in the First World War. In 1919, he directed a motion picture entitled Il mistero di Galatea, which starred his wife – Marga Sevilla. The following year, he directed a silent historical ﬁlm along with Enrico Guazzoni called Il Sacco di Roma.

During the 1920s, he travelled extensively in the Middle East, Japan and Latin America and also became a member of the Italian Royal Academy. He died in 1932.