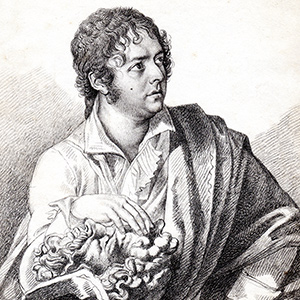 The son of a carpenter, Jean Baptiste Wicar was born in Lille on 22nd January 1762. He studied drawing at the free school in Lille before further honing his talents at the studio of Jacques-Louis David. The drawings Wicar created of tableaux, paintings, statues, bas-reliefs and cameos in the Gallery of Florence and at the Pitti Palace were published in four volumes at the Lacombe publishing house of Paris between 1789 and 1807.

During the French Revolution Wicar headed the Commission des Sciences et des Arts, which had been set up to loot artworks from the Austrian Netherlands in order to enrich museums in France. An initial convoy from the commission left Antwerp on 11th August 1794, notably with paintings by Rubens, for the Louvre. Abbeys and castles were targeted and then systematically emptied of their contents, furniture and works of art. Wicar was also a member of the commission during their Italian campaign, in the entourage of Napoleon Bonaparte. This commission was similarly charged with seizing artworks that could enrich French national museum collections.

He finally permanently settled in Rome in 1800 and became a portraitist of European renown as well as teaching Italian illustrator and engraver Francesco Giangiacomo, who documented many of the works there.

Having remained in Rome until his death in 1834, Wicar left an extensive collection of 1,300 drawings he had accumulated over his lifetime to the Société des Sciences, de l’Agriculture et des Arts de Lille. Most of these were from the Italian school, but also in some small measure from the northern schools, it held drawings by artists like Raphael, Albrecht Dürer, Lucas Cranach, Nicolas Poussin and Jacques-Louis David. This legacy initially formed the public Musée Wicar, which in 1866 merged into the Palais des beaux-arts de Lille.