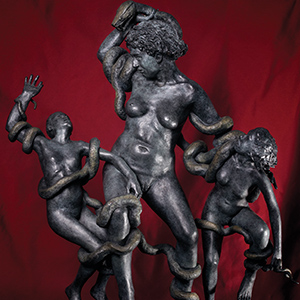 Lea Monetti is an artist who works in many different mediums, she is an adept painter who often works in the ancient technique of fresco and a sculptor who specialises in the medium of bronze. In the 1970s, she attended courses at the Accademia di Firenze and at the Scula della Realtà in Florence. Later, she worked on the restoration of damaged frescoes in B. Saetti’s office in Montepiano.

Since 1972, she has worked as an independent artist with the ‘Aldobrandeschi Gallery’. She has also worked for ‘Galleria 38’ in Grosseto, the ‘Cour du Cigne’ Gallery in Geneva, ‘900 Arte Italiana’ and ‘Art Club 2’ in Rome. Her works have been shown in several solo exhibitions internationally – in Italy, Switzerland and Germany. She famously hosted an exhibition of recovered frescoes from Cairo, which was sponsored by the Italian Ministry of Foreign Affairs, who subsequently promoted an exhibition of her works in Wolfsburg.

In 1988, she signed an exclusive contract of management with G.B. Remo Bianco, an esteemed expert of contemporary painting. Since this time, she has been represented in international art events along with: the Bueno brothers, R. Squillantini, L. Alinari and E. Bandelli.

She spent the following decade exhibiting in solo exhibitions in northern Europe with great success. After this period, she returned to Italy in order to create sculptures for the ‘900 Arte Italiana’, the ‘Eldek’ and ‘Art Club 2’. In 2000, she suspended her artistic activity in order to restore a farmhouse in Maremma and to then set up a business there. Since then, her works has been displayed in prestigious exhibitions and in both public and private museums, alongside the works of distinguished artist’s such as Cesetti, Gentilini and Ligabue. In 2011, she resumed exhibiting in Florence.

Her works are currently represented in ‘Art Club 2’ in Rome, ‘Galleria Dei Fossi’ in
Florence, ‘Interior Design’ in Brescia and ‘Galleria La Ducale’ in Milan.