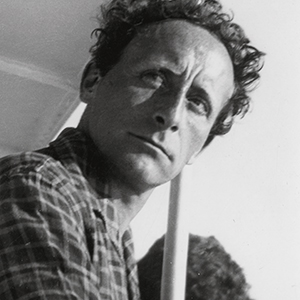 Leoncillo was born on the 18th of November 1915 in Spoleto, an Etruscan, Roman and Medieval town in the heart of Umbria, a region famous for its ancient traditional ceramic workshops. His father, who died when the child was three, taught drawing in the local technical school “G. Spagna”, where Leoncillo signed up in 1926. Confined at home during a summer for punishment, he discovers clay at the age of 14: his first preserved work, a funny monkey.

Encouraged by the Calabrian sculptor Domenico Diano, author of Spoleto’s WW1 memorial, he attends the Art School in Perugia from 1931 to 1935, his first works are portraits in Medardo Rosso’s style. He soon moves to Rome where Lionello, his much elder brother,  teaches Italian at a Catholic school,  where Leoncillo  will teach drawing while attending art classes at the Art Academy of via Ripetta. In 1936 he came into contact with the Galleria della Cometa, a centre of attraction for the so called Scuola Romana: Mario Mafai, Antonietta Raphael, Corrado Cagli and the younger Mirko and Afro Basaldella, and Marino Mazzacurati who will work in the same workshop at Villa Massimo with Leoncillo after the war.

In 1939 he marries Maria Zampa,  a fellow art student of Perugia’s time, daughter of a notary in Umbertide, a small town in which is the Rometti’s factory of modern artistic ceramics where he will work and produce I Mostri:  the Harpy, the Mermaid, the Hermaphrodite. These are his first masterpieces, influenced by the grotesque expressionism of the painter Scipione. They were exhibited in 1940 in Milan, for the VII Triennale, where the artist was invited by the famous architect decorator Giò Ponti, obtaining a gold medal for his work. Enlisted in the Army while working on two monumental Roman Trophies for E42 (Mussolini’s World Fair that never took place) he will join the Resistance after Italy’s Surrender in 1943. The Roman Mother killed by the Germans, exhibited in liberated Rome while the war still went on, is an example of the dramatic style attained by Leoncillo as an artist engaged as he was in the Italian Communist Party. In the years after the war Leoncillo develops a neo-cubist style in which he transforms miners, or typists or switchboard operators, into small colorful monuments in Picasso’s style. Apart from his works exhibited in Italy and abroad and in Venice’s Biennale, Leoncillo is also very active producing ceramic decorations for bars, restaurants, cinemas and theatres which created a new style identifiable with Italy’s renewal and economic postwar “Miracle”.

In 1956, following the USSR invasion of Hungary, Leoncillo resigns from the Italian Communist Party. A crisis that will bring a radical change of style, culminating in an exhibition in the Roman gallery La Tartaruga, where tormented simple forms are shown. Simple subjects, such as a bunch of flowers, a tree, a bush, a cactus, are transformed into barely recognizable semi-abstract sculptures.

Here begins the non naturalistic final development of Leoncillo’s art, which will produce works of increasingly monumental size in which ceramics shaped like mineral  forms are given suggestive titles – Taglio (Cut), Frattura (Fracture), Corpo dolente (Body in pain) – that well convey the tragic and suffering appearance of matter as if human senses have been blown into it. Leoncillo dies suddenly, in Rome, of a brain stroke, on the 9th of September, soon after the opening of the Venice Biennale of 1968, an edition marked by the younger artists’ protest, that forced Leoncillo to cover his works with plastic sheeting.