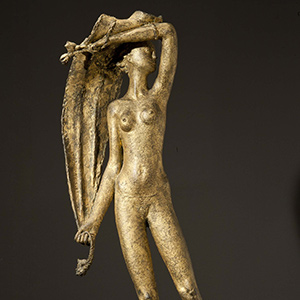 Libero Andreotti was born in Pescia in 1875. He worked as a blacksmith until the age of seventeen, when he moved to Lucca and met Giovanni Pascoli who introduced him to art. With the support of his uncle he found a job at the publisher Sandron in Palermo, where he worked as illustrator of the socialist weekly La Battaglia.

In 1899, dissatisﬁed with his new environment, he returned to Florence where he worked as a typographer. Andreotti came to sculpture relatively late. It wasn’t until 1902 that he began sculpting after being encouraged by friends Galileo Chini, Oscar Ghiglia and Adolfo De Carolis. Shortly after, he moved to Milan, where he met Vittore Grubicy.

Grubicy recognised his talent and took him to participate at the seventh International Exhibition of Art at the Biennale di Venezia. In 1906, in Milan, he joined the Divisionisti group. From 1907 to 1914 he lived in Paris where he was inﬂuenced by Bourdelle and J. Bernard. In 1911 he held a personal exhibition at the Bernheim Jeune gallery, which achieved considerable success. Following the outbreak of the First World War he was forced to return to Italy.

Once back in his homeland his research shifted to the monumental, he began referencing both Romanesque sculpture and the art of ﬁfteenth-century Florence. Works belonging to this period include the war memorials of Roncade (1922) and Saronno (1924); the Pietà and the reliefs in the Chapel of the Italian Mother in Santa Croce, Florence (1924-1925) and the risen Christ in the Victory monument in Bolzano (1928). He died in Florence on 4 April 1933.