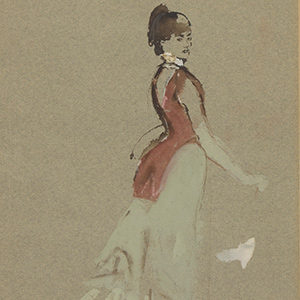 Lila De Nobili was born in Castagnola, Lugano, in 1916 and was one of the most gifted scenographers and costume designers of the twentieth century. She was the daughter of Prospero De Nobili and Dola Vertes, and sister of the renowned painter and costume designer Marcel Vertes. In the 1930s, she studied under the artist Ferruccio Ferrazzi at the Academy of Fine Arts in Rome.

In 1943, she moved to Paris, where she began executing fashion illustrations for the haute couture collections of various magazines, as well as creating illustrations for high end advertisements and publicity drawings of celebrities. Her uncle, Marcel Vertes, introduced her to Vogue in the 1940s and shortly after she began designing costumes for opera and ballet. She created costumes for Rouleau’s works including Angel Pavement (1947), Le voleur d’enfants (1948), A Streetcar Named Desire (1949), La Petite Lili (1951), Anna Karenina (1951), Gigi (1951), Cyrano de Bergerac (1953), The Country Girl (1954), The Crucible (1954), La Plume de Ma Tante (1958), L’Arlésienne (1958), Carmen (1959) and The Aspern Papers (1961). She went on to work with composers and directors such as Giancarlo Menotti and Luchino Visconti on ballets, operas and plays. With Visconti at La Scala opera house in Milan, she designed sets and costumes for his deﬁnitive La Traviata (1955), including Maria Callas’ iconic costume for Violetta.

In the late 1950s and 1960s, De Nobili designed seven Shakespeare comedies and late plays for Hall at the Royal Shakespeare Company at Stratford-upon-Avon and the Aldwych Theatre, London. She also designed many ballets and operas at The Royal Opera House of Covent Garden during this time. In France and Italy during the 1950s and 1960s she continued to be a proliﬁc costume designer for ﬁlm, ballet and opera. Her projects during this period include Jean Babilée’s Sable (1956), Franco Zefﬁrelli’s Mignon (1957), and Orphée (1958), Raymond Rousseau’s Ruy Blas (1960), Menotti’s La Bohème (1960), Zefﬁrelli’s Falstaff (1961), Aida (1962) and Rigoletto (1963) and Jean Babilee’s Le Roi des Gourmets (1964). She died in Paris in 2002.