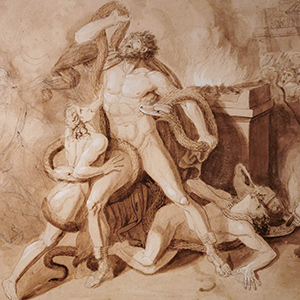 Luigi Ademollo was born in Milan on 30th April 1764. He learned his craft at the Academy of Fine Arts of Brera in Milan, where he was taught by Giuliano Traballesi, Giocondo Albertolli and Giuseppe Piermarini. In 1783 he left Milan and spent a period of time travelling and working between Rome and Florence before, in 1789, being appointed as professor at the Academy of Fine Arts in Florence in the same year as he had completed the decorations of the Teatro della Pergola. He would go on to spend the major part of his life between Florence and Rome, where he married Margaret Cimballi Ferrara in 1792 and started what was to become a large family.

In Florence he worked in the chapel of the Palazzo Pitti and in various rooms of the same palace, as well as in the Basilica della Santissima Annunziata, and in the Pucci and Capponi palaces. He also worked for churches in Bergamo, Brescia, Lucca, Livorno, Pisa and Siena. Although Ademollo primarily painted frescoes with biblical scenes from the Old and New Testaments, his abilities as a decorator were accompanied by considerable literary culture, and his son Agostino Ademollo (1799–1841) would go on to be a writer of romances, including Marietta di’ Ricci.