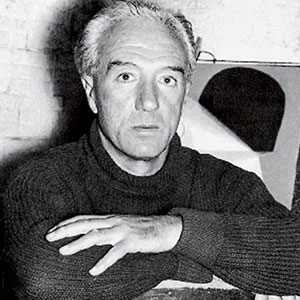 Manuel Ángeles Ortiz was born on 13th January 1895 in the southern Spanish town of Jaen. At just three years of age his family moved to Granada, where he would study painting with Juan Larrocha and at The Superior School of Industrial Arts as well as becoming close friends with Federico Garcia Lorca, arguably the most important Spanish writer of the 20th century, whilst he and his milieu of young artists El Rinconcillo met in the Café Alameda.

In 1919 he married Francisca Alarcon and would later have a daughter, Isabel Clara. During this period he also visited Madrid where he came into contact with Salvador Dalí, Moreno Villa and Luis Buñuel and in 1922 he moved to Paris where met and became friends with Pablo Picasso. During his time in Paris Ortiz became close with a group of artists in the School of Paris and began to participate in their exhibitions, he also collaborated with Spanish filmmaker Luis Buñuel on his 1930 surrealist masterpiece Le edad de oro, on which Salvador Dali also worked.

From 1932 he returned to Spain where he met artist Joaquín Torres-García and poet Pablo Neruda and collaborated with the anti-fascist intellectual league to exhibit at the Pavilion of the Spanish Republic. At the end of the Spanish Civil War Ortiz exiled to Buenos Aires, where he created his wood series and was involved in the third exhibition at Galeria Muller (1947) before returning to Europe in 1949 where he reconnected with Picasso. In 1957 Ortiz was allowed to go back to Granada where he was reunited with family and friends, after which he began his notes series which included, among many others, Albaycines, Paseos de Cipreses and Cabezas.

In 1981 he received the Gold Medal of the city of Jaén, which also made him Hijo Predilecto for his exceptional contribution to the arts, as well as the National Prize for Plastic Arts. Three years later, on 4th April 1984, Manuel Angeles Ortiz died in Paris. Today his work is represented in numerous national and international museums, including the Museo Nacional Centro de Arte Reina Sofía in Madrid, the MoMA in New York and the Musée de Grenoble.