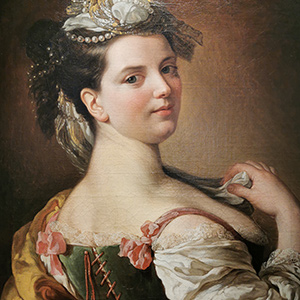 Marco Beneﬁal was born in Rome in 1684. He was a proto-Neoclassical painter, best known for his 18th century decorative Rococo style. His paintings portrayed tangible human ﬁgures, with a complex treatment of space and a luminous, warm colour palette. His works exemplify his desire for a return to the classical foundations of Italian painting. He painted altarpieces, frescoes, as well as numerous portraits.

He was initially trained in Rome under Bonaventura Lambert, and assisted in the painting of the Chapel of the Sacrament in Saint Peter’s Basilica and in the Carmelite Convent of San Alberto. In 1716, he had painted a San Saturnino for the church of Santi Giovanni e Paolo (Rome). His 1718 papal commission for a Jonah, painted for Basilica of St. John Lateran, was rewarded also by the papacy with the title of Cavaliere.

In 1720, he protested against the Accademia di San Luca’s decree that only members or those meeting the approval of the painter’s guild could teach drawing. His appeal to the councils of Pope Clement XI succeeded in having the ruling revoked. During 1720-27, he completed painting on the Story of San Lorenzo for the Duomo of Viterbo. In 1721, he completed a Pietà with angels & symbols of the passion for the church in the monastery of Santa Maria dei Sette Dolori. He painted for the church of Santa Maria alle Fornaci, two lunettes on the story of John the Baptist. From 1722-1727, he completed four canvases for the Crocifisso alla Collegiata in Monreale. In 1729-1732, he painted two canvases of Santa Margherita da Cortona for the church of Santa Maria in Aracoeli, as commissioned by cardinal Pietro Marcello Corradini. At the age of 57, he was ﬁnally elected into the Accademia di San Luca.

Shortly after his election he denounced his fellow members and was expelled in 1755. He died in Rome in 1764.