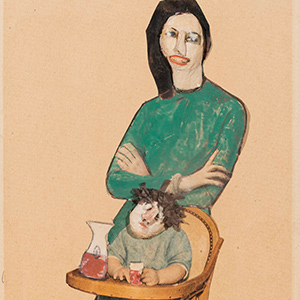 Margherita Vanarelli was born in Rome in 1916. She was an entirely self-taught artist who dedicated her life completely to her work. She began as a fashion designer at the Fontana sisters’ studio, and later became an assistant to her elder brother Augustus who was a painter, sculptor and designer. In the early 1950s, he had opened the Antea art gallery in Via del Babuino, Rome.

She worked as a secretary and caretaker in her brother’s gallery, and as a result she knew all the artists who passed through its doors during the ﬁfties and sixties. Artists such as Giorgio De Chirico, Renato Guttuso, Pericle Fazzini, Giulio Turcato and many others. During this time, she never stopped her own artistic practice.

She portrayed Ava Gardner on the set of the ﬁlm The Barefoot Contessa (1954) and designed the bas-relief decoration for Termini Station. While working in the gallery she drew swarms of tiny children in aprons that recall the humorous drawings of the cartoonist Sempé, as well as numerous self-portraits in pen or pencil. She also created small stages upon which she set up stories of everyday life, where she emphasised it’s ridiculous and contradictory aspects. She died in Rome in 2005.