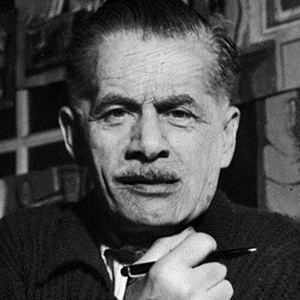 Mario Sironi was born in Sassari on 12th May 1885. He was the second of six children. Following the untimely death of his father, who left him orphaned at the age of thirteen, he moved to Rome where he later studied. His adolescence was spent in a house on via di Porta Salaria, not far from Villa Borghese. It was an adolescence marked not only by the charm of the Eternal City but also by a great passion for reading (Schopenhauer, Nietzsche, Heine, Leopardi, the French novelists) and the study of music, especially Wagner who played the piano with his older sister Cristina. In 1902 he began to study engineering but a year later, encouraged by the positive opinion of the old sculptor Ximenes, he left and devoted himself to painting. It was whilst attending Scuola Libera del Nudo in via Ripetta that he met and studied with Giacomo Balla as well and becoming close friends with Umberto Boccioni and Gino Severini.

In 1914 he moved to Milan, where he fought alongside Filippo Tommaso Marinetti in the First World War. The post-war period saw Sironi work as an illustrator for the magazine Popolo d’Italia, during which time he met Margherita Sarfatti, a journalist and art patron who would share a long and mutually influential association with the artist. In 1920 he signed il manifesto futurista along with Leonardo Dudreville, Achille Funi and Luigi Russolo and in 1922 he joined the group of artists called Novecento. From the beginning of the thirties the artistic interests of Sironi diversified, ranging from graphics to stage design, from architecture to mural painting and from mosaics to frescoes. In 1932 Sironi contributed to Mostra della Rivoluzione Fascista, held at Palazzo delle Esposizioni in Rome. His taste for the monumental and spectacular can be seen in many of his works, especially those created for the state (the Palace of Justice in Milan, buildings in Rome’s EUR district, etc.). It was with the same flare that Sironi prepared the hall of honour at the Festival of Sport in Milan (1935), the Fiat pavilion at the Trade Fair of Milan (1936) and the Italian section at the Universal Exhibition in Paris (1937).

After World War II, isolated and weathered by the death of his daughter, he returned to easel painting, creating works of intense expressiveness. These works were dark and dramatic, abandoning the monumental character and great eloquence of prior years in favour of a different, more resigned spatial conception.