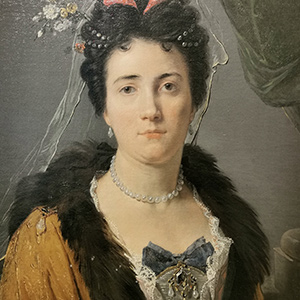 Pier Leone Ghezzi was born in Rome in 1674. He was a Rococo painter and caricaturist. He trained under his father, Giuseppe Ghezzi (1634 – 1721), who was secretary of the Roman Accademia di San Luca.

In 1705, he joined the Academy and painted for various churches including the Cappuccini of Frascati and San Onofrio of Urbino. He also painted frescoes in the Villa Falconieri of Frascati.

Ghezzi is most renowned and admired for his caricatures. He produced thousands of portrait drawings and was highly skilled at capturing the essence of his subject with a few rapid strokes of his pen. He made many caricatures of members of the Papal and Jacobite courts, who are often depicted in a satirical fashion.