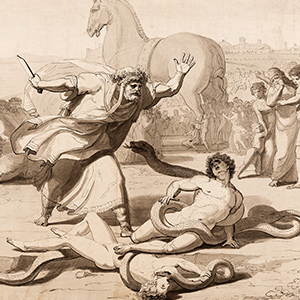 Born on 8th January 1769 in Arezzo, Tuscany, Pietro Benvenuti took his first influences from the style of Jacques-Louis David. He was a student of the Academy of Fine Arts of Florence, and then went on to study in Rome, 1792–1803, where he created an informal academy with long standing friend Vincenzo Cammuccini as well as Luigi Sabatelli. He returned to practice in Arezzo.

In 1807 he was recruited as court painter to Elisa Bonaparte Baciocchi and to direct the Florentine Academy of Fine Arts. Alongside a group of collaborators and students Benvenuti was commissioned by Baciocchi in 1811 to decorate the new rooms of the Palazzo Pitti, where he painted an ambitious cycle of works dedicated to The stories and endeavours of Hercules. The decoration is subdivided into four large framed paintings on the walls – with Hercules at the crossroads, Hercules strangles the serpents, Hercules leading Alcesti to Admeto and The Battle of Hercules and the Centaurs – as well as ten monochrome frescoes below the vault featuring a depiction of the Marriage of Hercules and Hebe. Another prestigious commission, from the restored Grand Duke of Tuscany, Leopold II, was to fresco the dome of the Capella Medicea at San Lorenzo, where he depicted eight grand subjects taken from the Old and the New Testament, the four Prophets and the four Evangelists. Under Benvenuto’s guidance, Carlo Lasinio also engraved the Luca Giordano frescoes in Palazzo Medici-Riccardi. As well as this he was an associate of the Accademia di Brera in Milan, and in 1829 was elected into the National Academy of Design as an honorary member.

He died on 3rd February 1844 in Florence, still holding the position of Director of the Florentine Academy of Fine Arts. Whilst in the position he had taught many who would go on to become important names in the art world, including Giuseppe Bezzuoli, Gaspero Martellini, Tomasso Gazzarini, Niccola Cianfanelli, Luigi Mussini, and Giorgio Berti.