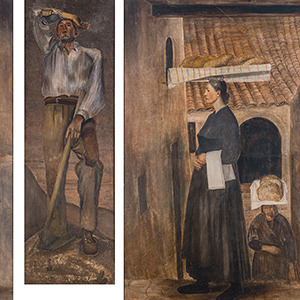 Pietro Gaudenzi was born in Genoa in 1880. He was a painter, whose initial training was under Francesco Del Santo. He later studied at the Accademia Linguistica in Genoa, under Cesare Viazzi. In 1899, he worked as an artist for the Genovese newspaper Il Lavoro. In 1903, he won a scholarship to study in Rome for ﬁve years in the studio of Francesco Carena. Among his most frequent subjects during this time were maternal genre scenes. In 1910, his ﬁnal work at the end of his scholarship, a painting entitled I Priori was awarded a gold medal at an exhibition in Milan. The painting now resides at Galleria Nazionale d’Arte Moderna in Rome.

In 1913, he was awarded another gold medal for the Torso of a Young Woman at an Exposition in Munich, Bavaria. In 1915, he won the Principe Umberto prize for a painting of The Deposition. He painted portraits of Signora Albanese (Gold medal in 1924, Monza), Wally Toscanini, Padre Giovanni Semeria, cleric Saule Radaelli, and Maresciallo Enrico Caviglia. He had been named professor emeritus for the Academies of Genoa and Parma. He became a professor of painting at the Brera Academy. After the 1920s, the subject matter of his paintings shifted focus to patriotic celebrations of work and duty, which were favoured by Fascist authorities. He gained many prestigious appointments in the 1930s, including a professorship at the Academy of Fine Arts of Naples, the Mussolini prize for arts in 1936, and was nominated to be a member of the Accademia dei Virtuosi at the Pantheon, and to the Accademia di San Luca in Rome. He was president of the latter in 1937-38.

In 1940, the Ministry of National Education awarded him a gold medal. After the War, he lost most of his ofﬁcial positions. He took a job directing the Vatican School of Mosaics in 1951.