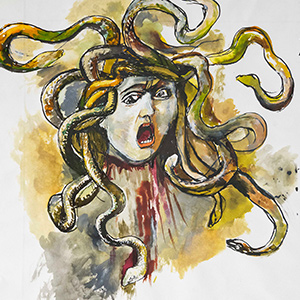 Renato Guttuso was born in Bagheria, near Palermo in Sicily, in 1911. He was a painter, set and costume designer and illustrator. He was a ﬁerce anti-fascist who ‘developed out of Expressionism and the harsh light of his native land to paint landscapes and social commentary’ (Adrian Hamilton, “Past masters of Futurism”).

He began painting at an early age, and began signing and dating his works at thirteen. He went to school and university in Palermo, where he was inﬂuenced by European ﬁgurative artists such as Courbet, Van Gogh and Picasso. In the early 1930s, he frequently visited the studio of one of the most proliﬁc futurist painters, Pippo Rizzo. In 1931, he participated in the Rome Quadriennale and joined a collective of six Sicilian painters. He later became a member of the artistic movement ‘Corrente’, which stood in opposition to ofﬁcial culture and was strongly anti-fascist in its thematic choices through the years of the Spanish Civil War (1936-1939). Within this group he developed his ‘social’ art, his moral and political commitment is visible in paintings such as Fucilazione in Campagna (1938), which is dedicated to the writer García Lorca. He moved to Rome in 1937 and joined the banned Italian Communist Party (PCI).

He became a renowned artist during the war and won a prestigious prize in 1941. Some of his best-known works are from this period, which include Flight from Etna (1938-39) and Cruciﬁxion (1941). In 1945 Guttuso, along with artists Birolli, Marchiori, Vedova and others, founded the ‘Fronte Nuovo delle Arti’ (New Front of the Arts) which promoted the work of those artists who had previously been suppressed by fascist rule. During this time, he met Pablo Picasso, who would remain Guttuso’s close friend until his death in 1973. Socio-political themes dominated his work during this period, where he depicted the day-to-day lives of peasants and blue-collar workers. In 1950, he was given the World Council of Peace Prize in Warsaw. He later received the Lenin Peace Prize in 1972. In 1976 he was elected to the Italian Senate as a PCI representative for the Sicilian constituency of Sciacca. He died in Rome in 1987.