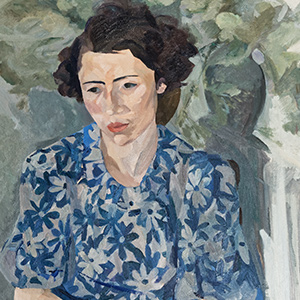 Roberto Melli was born in Ferrara in 1885. He was a painter and sculptor of the Scuola Romana. He was from a family of Jewish traders. In his twenties, he moved to Genoa to start an apprenticeship as an engraver. In 1910, he moved to Rome, where he shared a studio with the sculptor Giovanni Prini.

In 1913, he participated in the ﬁrst exhibition of the Scuola Romana, and subsequently exhibited his work at various shows organised by the Futurism movement. However, from this point on Melli pursued his own unique style and technique of painting. In 1915, together with artists Vittorio Costantini, Cipriano Eﬁsio Oppo and Guglielmo Pizzirani, Melli formed the ‘Gruppo Moderno Italiano’ (Modern Italian Group). In 1918, he contributed to the creation of the magazine Valori Plastici. He became friends with Giuseppe Capogrossi and Emanuele Cavalli, and undersigned the ‘Manifesto del Primordialismo Plastico’. After a solo exhibition in 1936, his public activity was compromised by the Fascist antisemitic laws, which prohibited any Jewish artists to exhibit in public galleries or teach in schools. After the Second World War, Melli returned to his artistic practice.

Each week at his ﬂat in Rome, he hosted a group of young painters which included Renato Guttuso, Enrico Accatino, and Fausto Pirandello. From 1945 he taught at the Accademia di Belle Arti of Rome and participated in several personal and collective exhibitions. In this period, Melli was considered one of the major representatives of the Scuola Romana. In 1950, he was invited to exhibit at the Biennale di Venezia, which honoured him with a ‘personale’. In his last years, Melli continued a parallel activity of painter and art critic. In 1957 he published a book of poetry, Lunga favolosa notte (The Fabulous Long Night), and in 1958 the Galleria Nazionale d’Arte Moderna in Rome opened a retrospective exhibition of his work, organised by curators Nello Ponente and Palma Bucarelli. Melli died in Rome in 1958.