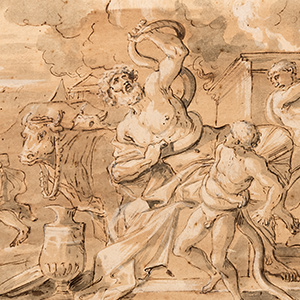 Sébastien Bourdon was born in Montpellier on 2nd February 1616 – his family were craftsmen of modest means. His father, Marin, was a painter and glazier, and his mother, Jeanne Gaultière, was the daughter of a master goldsmith. Sébastien was baptised on 10th February in Montpellier church. When he was six, Montpellier suffered a difficult time because it refused to recognise Louis XIII: under the leadership of the Prince of Condé, it resisted a siege by royal troops Although the town managed to hold out for three months, it finally surrendered and the king’s army took control in 1622. Sébastien, still only a child, was sent to Paris as an apprentice artist and around 1630 he went to Bordeaux and Toulouse, later moving back to the capital.

He continued his training in Rome which, although a dangerous place for a protestant like Bourdon, was considered to be the ideal place for an artist at that time. Whilst there he became a close friend of painter Louis de Boullogne (senior), who put pressure on him to renounce his faith, but without success. In 1636 he had to return to Paris because a painter with whom he had quarrelled threatened to denounce him as a heretic to the Inquisition in Rome.

On his arrival in Paris, he became very friendly with Louis du Guernier, a Protestant painter, and actually married his sister Suzanne, through this marriage he came into close contact with the Protestant circle of artists, goldsmiths and jewellers. In 1643, the corporation of goldsmiths chose him to paint their altarpiece, an annual gift to Notre Dame in Paris. The painting, called The Crucifixion of Saint Peter, can still be seen in Notre Dame today.

Sébastien’s son, Abraham, born in 1648, was baptised in the church at Charenton – his godfather was Abraham Bosse. In the same year, Sébastien Bourdon took an active part in the founding of the Academy and was one of the twelve “Elders”. From the very beginning he was a key member of a dynamic group of artists working for this institution – among them were his brother-in-law du Guernier, the two Testelins, Ferdinand Elle, Samuel Bernard, Thomas Pinagier and Abraham Bosse.

After moving to Stockholm in 1652, Queen Christine of Sweden, who considered him to be an outstanding artist, made him her first court painter. Following two successful years in this position Bourdon returned to Paris and completed some major commissions before returning to his hometown of Montpellier in 1957 where he had been asked to paint The Fall of Simon the Magician. This picture was to be hung above the main altar in the Saint Pierre cathedral and it can still be seen there today. While he was in Montpellier he also painted many portraits.