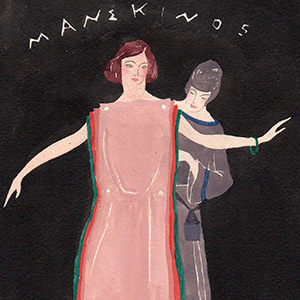 Ernesto Michaelles was born in Florence in 1893. He was a Futurist artist and designer, who was known by his pseudonym – Thayaht.

He studied painting at the Académie Ranson in Paris, as well as scientiﬁc dyes and dynamic structure at Harvard University.

In 1919, Michaelles started designing his most famous piece. The TuTa, which the artist described as ‘the most innovative, futuristic garment ever produced in the history of Italian fashion’ was an early example of what we now call coveralls.

He intended to revolutionise fashion by creating a distinctly modern and Italic style. Initially intended as a practical item of clothing for all, it was instead adopted almost exclusively by members of high society in Florence. From 1919 to 1925, Thayaht worked as a designer in collaboration with Madeleine Vionnet, the couturière credited with introducing the bias-cut to Parisian fashion. He returned to Italy in the late 1920s and continued his career in the applied arts.

He was a pioneer of Industrial Design, exhibiting fabric and clothing samples, as well as furnishings and furniture at the 1923 and 1927 Esposizione Internazionale d’Arti Decorative di Monza. These designs were again intended for mass distribution. During the 1930s he exhibited at the ﬁrst Roman Quadrennial (1931), organized the Futurist Exhibition of Painting, Sculpture, Paintings of Airplanes and Decorative Arts at the Galleria d’Arte in Florence, exhibiting at the Venice Biennale from 1932 to 1936 and at the Milan Triennale in 1933 and 1936.

In the mid-1930s he retired to Marina di Pietrasanta, where he turned his attentions towards scientiﬁc study and astronomy. After the end of the Second World War, he founded the CIRNOS (independent station for the recording of space information), which aimed to record evidence of UFOs. He died in Florence in 1959.