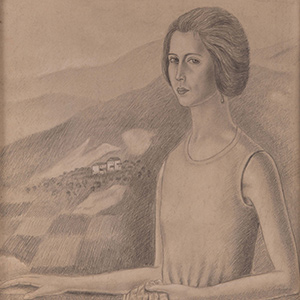 Ubaldo Oppi was born in Bologna in 1889. He was a painter and one of the founders of the Novecento Italiano in Milan. He painted in a neo-quattrocento realist style. His father, a shoe salesman, sent him north to Germany to learn the shoe trade. However, he elected to stay in Vienna between 1907-1909 and study under Gustav Klimt.

He returned to Italy and was drafted into the military for a year. He then travelled to Paris, where he became a member of modern artistic circles. In 1913, he exhibited at the Cà Pesaro in Venice along with Casorati, Martini, and Gino Rossi. In 1915, he joined the army again. Near the end of the First World War, he was captured and imprisoned at Mauthausen by the Austrians. After the war he returned to Paris, exhibiting at the Salon des Indipendants of 1921.

In 1922, he was one of the founders of the Novecento Italiano, patronised by Margherita Sarfatti and the fascist party. In 1924, he exhibited at the Venice Biennale. In that same year he won second prize at the Mostra Mondiale of Pittsburgh. During this time, he frequently exhibited outside of Italy, in places such as Monaco, Dresden and Vienna. He left the Novecento Italiano group a few years after joining, and did not exhibit with them in the 1926 Venice Biennale. In the late 1920s Oppi became more religious, and many of his later works included altarpieces. In 1926-28, he frescoed the Chapel of San Francesco in the Basilica of St Anthony in Padua, and in 1932, for the church of Bolzano Vicentino. He served as a lieutenant colonel during the Second World War.