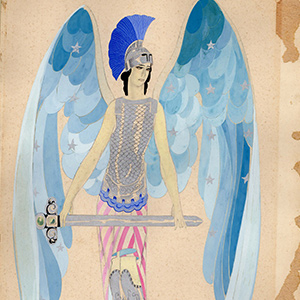 Umberto Brunelleschi was born in Monterulo in 1879. He studied at the Academy of Fine Arts in Florence. He moved to Paris in 1900 where he found success as a painter, illustrator and designer.

Under the pseudonym of Aron-al-Raxid or Aron-al-Rascid he worked as a caricaturist at the magazine ‘Le Rie’, as well as magazines such as the ‘Journal des Dames et des Modes’, ‘La Vie Parissienne’ and ‘Gazette du Bon Ton’. He was forced to interrupt his stay in Paris during World War I to go to the front line. In 1920, back in France, he worked on costumes for the ‘Folies Bergère’, at the Casino de Paris, Theatre du Chatelet.

He also began to work for theatres in New York, Germany and at ‘La Scala’ in Milan. He was very well known among collectors of books for illustrating the works of Voltaire (Candide, 1933), Charles Perrault (Contes du Temp Jadis), Musset (La Nuit Valentienne) and Goethe (Les Bijoux Indiscrets).